As I reflect on my year with WPAA-TV, I open a large manila envelope that contains review comments about the 2016 Video Festival Reel which was edited to represent what made 2016 different during our year together.

The reel was submitted with this description of 2016. 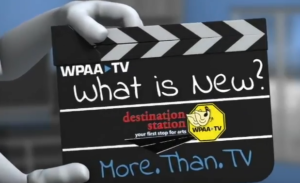 We hope you enjoy your video visit to wpaa.tv viewing our compilation reel: More.Than.TV

About our year 2016:
More.Than.TV was adopted in a strategic planning session. In an Aha moment our board realized the new logo [a ‘play-button’ between our organization abbreviation WPAA (Wallingford Public Access Association) and TV] essentially said what we want to be, when typed: WPAA > TV. Yes, we are ‘greater than’ TV.

What constitutes More.Than.TV
In January, we launched Destination Station to attract performance artists and filmmakers. By April, a local producer started a bi-monthly/audience welcome show, Music with Purpose. Both attracted dozens of new visitors per show in addition to versatile talent, Be The Music, our hyper-local loop of music by local musicians, concurrently got a boost when we added musicians performing at WPAA-TV to those eligible to be our alternative to a radio station backdrop to local messages.

Word did get out. Filmmakers began to understand that our equipment was available at no charge, and we distributed content with a duration other than 30, 60 or 120 minutes. Some used our studio, others borrowed remote equipment or editing tools to make short films. By Christmas, a newly forming ensemble of actors joined a local producer on a 10-episode film for 2017 release, The Sparrow Falling. The initial 20 seconds show tease “the orb” was re-purposed art from our #PowerfulWildFree4Arts sculpture exhibit.

Supporting nonprofits and finding more ways to engage local business was our counterpoint to the arts. Some businesses joined with producers, civic groups and citizens to make a Holiday Greeting, a decade-old WPAA tradition. Others participated in a new show CommUnity Conversations. Some did event Public Service Announcements. (PSA) In August, #In2Languages, a four-way community-outreach and business collaboration, was successfully launched. #In2Languages uses free Global News content in English from German international broadcaster Deutsche Welle, available to all Access Stations, with locally donor-funded versions of the same content in Spanish.

In 2016, WPAA-TV was sought out as a host training location for differently-abled individuals. Our graphics and audio capabilities were enhanced with these affiliations. We included some new promotional graphics at the end of our submission for overall excellence with samples of announcements including our own programs such as #GoodEnough2Share.

About the video festival
As a judging location, we take this festival and the commitment to judging very seriously.

Our score was two out of five in the criteria about representing different segments of our community. Two comments in support of this low score merely said, “needs more diversity.”  Nothing explained what was perceived as missing. This was perplexing. In addition to having content in two languages, we considered that being inclusive was our strength.

A 20-minute reel represents about 3,000 plus hours of content. Our reel had the following:
Types of programs Performance, Talk Shows, PSAs, Four different styles of film, Animation, LIVE, Remote, and Community Message Graphics;
Ages Kids, Youth, Seniors and everything in between;
Religion Christian, Jewish, Muslim;
Issues  Fitness, Mental Health, Business-Local, Manufacturing and Nonprofit, At-Risk Children, Veterans, African Dream; and
Race  More representative than our community.
Topics ranged from Medieval History to event promotion to role of nonprofits in the community to celebrating community.

I agree that our producers did not take great care about ‘audio cable visibility…’ but to identify WPAA-TV as lacking diversity… Makes me wonder if I need to represent the people on the margins rather than what walks in the door to be considered achieving our mission with excellence.

What is the universe telling me?