WPAA-TV reached the end of a ten-year journey that wouldn’t have been possible without community support. On Feb. 24, Nelson Ford, the oldest volunteer, and former board member, excitedly signed the final check to pay off the building, located at 28 So Orchard Street. 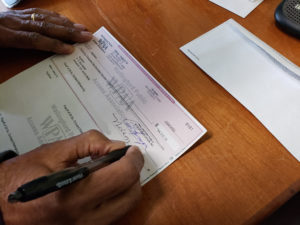 The building was paid off two years in advance of the expected 2022 date. The refinancing was made possible through Key Bank, saving WPAA-TV $7,000.

“We’ve owned it for a year thanks to pro bono help from attorney Lars Edeen,” said Susan Huizenga, WPAA-TV’s executive director. “We just haven’t had it paid off until this week.” Fundraising last May raised money from 200 members of the community.

It’s rare for community TV stations to own their building, according to Huizenga. However, owning the building reduces its operating costs. In 2008, WPAA-TV formed a building committee. In 2010, WPAA-TV faced a 60% rent increase. This motivated the nonprofit leadership to continue looking for a new location. “We wanted something on a bus line and in town in terms of walkability,” said Huizenga. “When celebrations were happening in town, in that last space all they had to do is open their doors, set up a booth outside and they were part of a community event.”

After facing rejection from the town regarding one location, WPAA-TV eventually found its current building, which needed significant renovation. “It did not even have plumbing on the first floor,” said Huizenga. “It was not up to code in terms of electricity. It could not be a public space without significant investment.”

WPAA-TV reached out to local skilled laborers, including plumbers, electricians, and carpenters. They agreed to donate work to the renovation project. A local benefactor who enjoyed WPAA-TV’s classic arts TV financed the down payment, and the prior owner of the building, the late Paul McNally, extended credit to the nonprofit for the purchase of the building.

Once the deal was settled, the local laborers sprang into action, renovating the building.  “The equivalent of what we get in cable fees was donated by volunteers to bring the space up to code,” said Huizenga. “They aggressively worked on the building for a year and a half, and it made occupancy standards within the first six months so that we could come into the first floor.”

After thorough renovation and years of payment, WPAA-TV gets to formally call the building theirs.

Our Spiritual Communities Inspire Me