Freeman P Quinn, 1st is the Free Speech Ambassador of WPAA-TV and Community Media Center. The slogan “Be Freeman” means to become digitally literate and be open to the opinion of others, not to adopt or follow, but to adjust your own knowing. The tag #AnyoneCanBeFreeman suggests that anyone can be an ambassador of informed free speech and participatory democracy.

Freeman P Quinn is an amalgamation (as best can be managed by volunteers) of our diversity and embodiment of the organization’s mission. Freeman is a resource to build our community at-large and the organization specifically with friend and barn raising encounters. 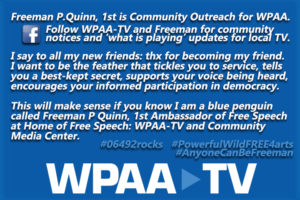 Backstory: In 2008, Freeman was named via a community naming contest. S/he was originally a blue penguin-like costume of Prinny created for a comic con. The 1st venture of a costumed volunteer into the public arena identified an immediate image problem as the individual was referred to as a “big blue chicken”.

Freeman is an idealized being not any one particular person such as the Executive Director of WPAA-TV. Even Facebook can tell the difference.

About Blue Penguins: They are loyal community of flightless birds. They co-parent, have excellent hearing and are not particularly fearful of humans as maybe they should be. Each penguin has a unique voice. They perceive their environments through visual, auditory, tactile and chemical stimuli. Blue penguins are mainly nocturnal. They perform most of their activity during the night in small groups of ten or less. They are not migratory. They stay close to their colonies. Inter-penguin interactions might include offers of rocks as a gifts.

Contributor Bradford May: Our Sincere Thanks

What are your filters?

Shoot for the moon. Even if you miss, you’ll land among the stars.